"Azerbaijan must be held accountable for its actions," Ararat Mirzoyan 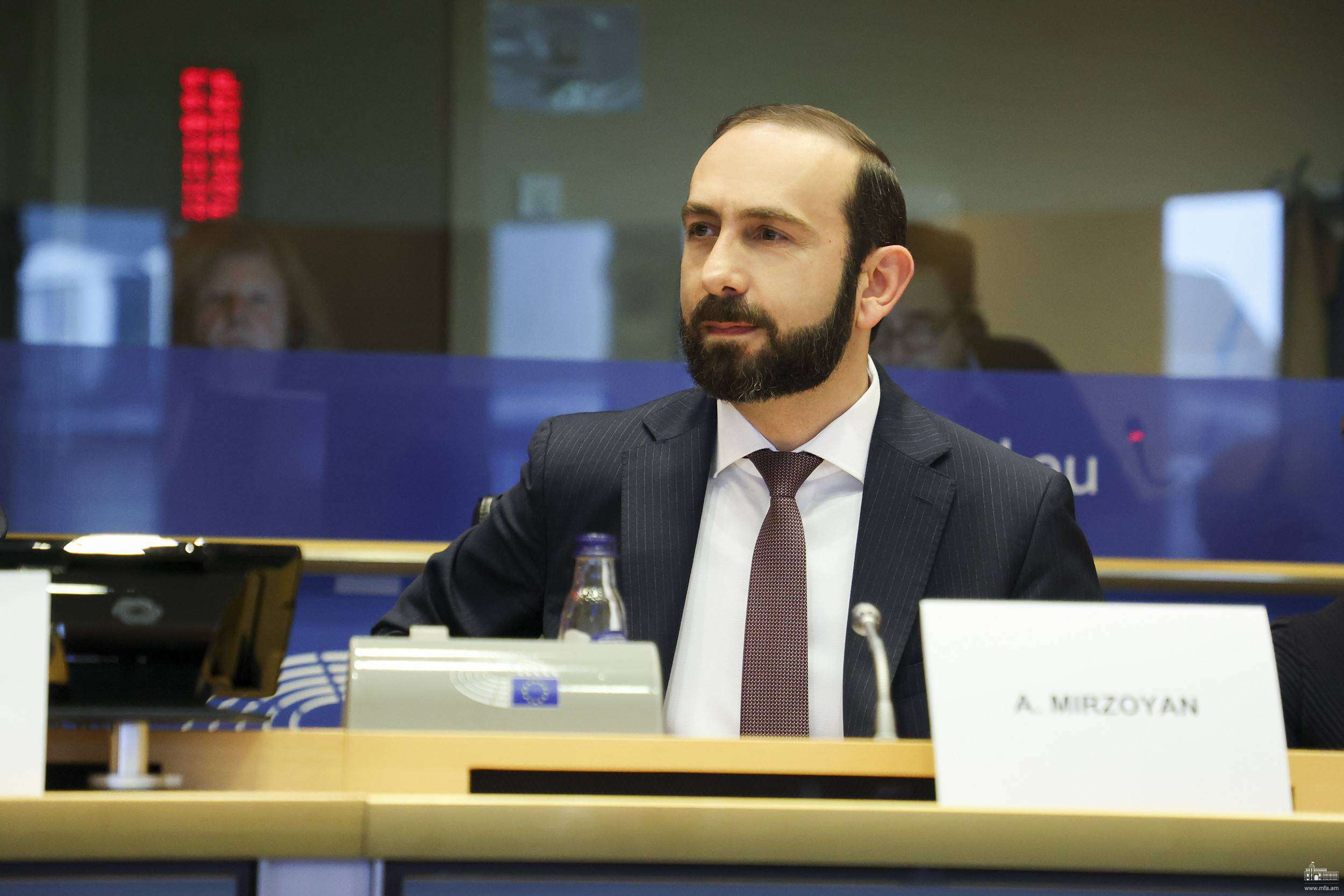 On January 24, RA Minister of Foreign Affairs Ararat Mirzoyan made a speech at the discussion held in the Foreign Affairs Committee of the European Parliament, in which he specifically said:

"Mr. President, First of all, let me thank you for meeting our request to discuss this format. Dear members of the European Parliament, and dear colleagues, I would like to continue my speech by sending sincere gratitude to the European Council in general and to each of you individually for expressing precise positions on the most critical issues for my country.

The urgent discussions and adoption of statements over the last two years regarding the issue of Armenian prisoners of war, the destruction of cultural heritage, and the humanitarian consequences of the recent blockade of Nagorno-Karabakh are an adequate and objective response to the unprecedented challenges facing the people of Armenia and Nagorno-Karabakh. These challenges continue to threaten the stability and security of our region. : All these challenges are perfectly summarized in the Common Foreign and Security Policy Report 2022, for which I would like to give special thanks to you, Mr. McAllister, and all the members of the European Parliament who worked on this report and contributed to Armenia, Nagorno Karabakh, the situation in our region objectively for inclusion of reflective sections.

Of course, I welcome the clear statements and every vote given by the European Parliament in favor of solving the mentioned humanitarian problems. Your voice was heard in Armenia and Nagorno-Karabakh. I hope it was heard and taken into account in Baku as well. Following the example of the European Parliament, other European institutions will show sufficient courage and justice in matters related to the South Caucasus.

Firm and clear messages from the European Union, including its legislature, are critical. First, the EU remains Armenia's primary partner in supporting our reform agenda based on shared values and institutions. Second, despite all the challenges, we continue to expand the scope of our partnership based on the European Union's commitment to promoting stability in our region.

We believe that our security architecture cannot be comprehensive without the protection of human rights and democracy. To ensure the well-being of our people, we have implemented reforms to strengthen human rights and the rule of law, ensuring effective governance and an uncompromising fight against corruption. I have a lot to say about Armenia's achievements in the field of democratic reforms, but I will not go into detail today due to lack of time. I can assure you that we are determined to continue the path of democratic reforms and expect further support from our partners.

Regarding the EU's valuable contribution to the stability of our region, I would like to welcome the decision made yesterday by the EU Council to send a long-term monitoring mission to Armenia. The purpose of this mission is the safety of people living in border areas, children going to school, people doing their agricultural work, and families who want to live in their homes without fear of being targeted: clear people, clear schools, clear houses.

During the last two years, the Armenian government, having received the vote of our citizens to advance the peace agenda and having the political will to regulate relations with Azerbaijan, has been conscientiously involved in negotiations in three different directions. The first is the unblocking of all transportation communications in the region, the second is border demarcation and security, and the third is a peace or settlement agreement between Armenia and Azerbaijan. In this regard, I would like to draw your attention to the following few points.

Immediately after the communications unblocking working group formed, Azerbaijan, interpreting the Trilateral Declaration of November 9, 2020, in its way, began to demand an extraterritorial corridor. I want to emphasize that Armenia is ready to open all communications as soon as Azerbaijan agrees that the roads should operate under the sovereignty and jurisdiction of the states they pass through.

Months after the border demarcation commissions were formed, Azerbaijan presented new territorial claims and tried to justify its latest aggression with the false argument that the border was not demarcated. Ironically, these commissions were created after the first Azerbaijani invasion of the sovereign territory of Armenia in May 2021 to prevent any further military action.

Thirdly, we have started negotiations on the text of the peace treaty between the Republic of Armenia and Azerbaijan. Regrettably, the overwhelming majority of fundamental proposals offered by the Armenian side regarding the peace treaty were rejected by Azerbaijan.

Among the recommendations is the adjustment of the criteria for the demarcation of the state border because we believe that with clearly agreed standards for the division of the interstate border between Armenia and Azerbaijan, real peace is possible. Next is the withdrawal of armed forces from the state border and the establishment of a demilitarized zone to prevent possible further escalation, as well as confidence-building measures and a security mechanism, the institution of guarantor(s) of the peace treaty, which will ensure the fulfillment of commitments.

In general, Azerbaijan expects Armenia should only accept all of its demands, and if it does not get what it wants, Azerbaijan uses all possible tools of pressure. From holding Armenian prisoners of war hostage to spreading state-sponsored hatred of Armenians, from bellicose rhetoric to using force.

We accepted Azerbaijan's proposal to discuss the settlement of relations between Armenia and Azerbaijan and the issue of Nagorno-Karabakh in parallel. Against this, Azerbaijan began to claim that Nagorno Karabakh is its internal problem, opposing Armenia's objective proposal to create an international mechanism for negotiations between Baku and Stepanakert.

It is also clear that Azerbaijan's actions so far, including the blockade of the Lachin Corridor, have once again proven the absolute necessity of international involvement in solving the rights and security issues of the people of Nagorno-Karabakh.

There is one circumstance that I would like to emphasize. This is not an isolated episode, and it should be considered as part of a large-scale and systematically implemented policy by Azerbaijan aimed at the ethnic cleansing of the people of Nagorno-Karabakh. By creating unbearable living conditions, Azerbaijan seeks to force the people of Nagorno-Karabakh to leave their homes and native land. The latest statement of the President of Azerbaijan, by which he proposed to expel those Armenians who do not want to become citizens of Azerbaijan, once again proves their intention to carry out ethnic cleansing.

We cannot stand aside and watch people slowly starve to death because of political games and perhaps geopolitical calculations. Let me say it straight. There are two theoretical options to remove the blockade of the Lachin Corridor. Military or diplomatic. Armenia is committed to the second option, but this is possible only in case of decisive intervention by the international community, intense pressure on Azerbaijan, and tangible actions in that direction. The time to act is now. Azerbaijan should be held accountable for its actions. It should be explained to Azerbaijan that there are international rules that everyone must obey."

After the speech, Foreign Minister Mirzoyan answered the questions of the members of the European Parliament. 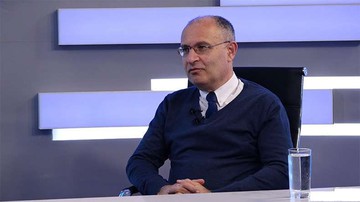 It is excluded that an international fact-finding group will be sent to Artsakh in the near future; M. Hayrapetyan

I see both prerequisites and necessity for negotiations. 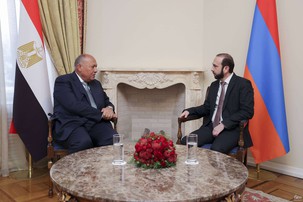 Ararat Mirzoyan presented to Sameh Shukry the daily worsening humanitarian situation in Nagorno-Karabakh due to the blocking of the Lachin Corridor by Azerbaijan.

Ararat Mirzoyan also presented the latest developments in the Armenian-Turkish normalization process to his partner. 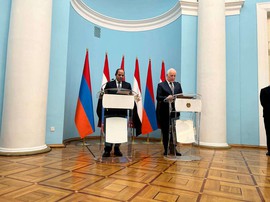 It should be noted that today the President of Egypt will also meet the Prime Minister of Armenia, Nikol Pashinyan.